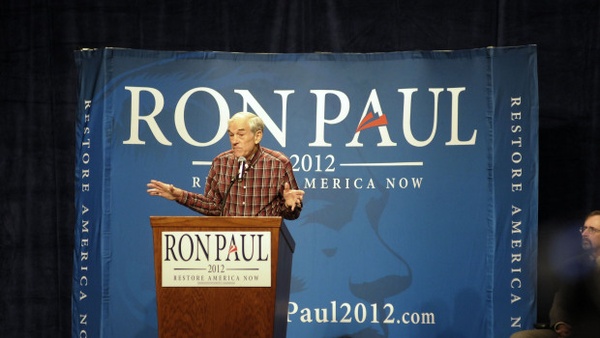 HIGHLIGHTS FROM THE GOP PRIMARIES

A STRIKING LACK OF COVERAGE —  The 18 news outlets evaluated during the February 25 to March 25 GOP primary season paid little attention to Ron Paul’s candidacy.  Only four outlets published more than twenty images of Paul during that time that researchers could find and pin — ABC, Huffington Post, Politico and the Washington Post — and 11 outlets published fewer than 10 photos of him during that month-long period that included Super Tuesday.

When photos of Paul did appear in news outlets, news outlets often pictured him as just one candidate in a group shot (or split-screen image) with the other GOP contenders.  And even in those images he rarely appeared as powerful or as charismatic as the other candidates; his facial expressions and body language made him appear less vigorous than Romney, less confident than Gingrich, less likable than Santorum.

ISOLATED & VULNERABLE:  In the majority of photographs pinned to Pinterest, Paul appeared either on stage or alone (or both), and as a consequence he appeared generally isolated from the public.  News outlets rarely pictured him mingling with supporters or even standing side-by-side with his wife.  When he did appear with others, those others often included his campaign security staff.

Perhaps because so much attention was paid to Paul’s opposition, major news outlets ran what seemed like rather arbitrary images of Paul. One reviewer deemed the one and only image retrieved from the Dallas Morning News as “odd” because it didn’t capture Paul speaking to supporters or otherwise engaging with voters — it showed him on stage before a red curtain, with hands raised like he was “casting a spell over his audience.” 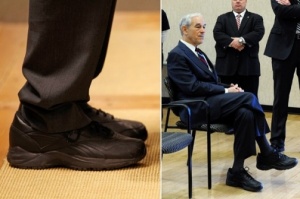 The only photo of Ron Paul to be pinned from The Daily Beast showed a close-up of his shoes. It accompanied an article on his “Libertarian fashion,” and noted his “untailored suits and orthopedic shoes.” 3/5/2012

Researchers rarely pinned photographs of Paul smiling; more photos pictured him speaking seriously, at times with a strained expression on his face and an awkward hand gesture.  When photographs captured him in mid-speech, he appeared more as a senior professor than a presidential candidate — impressions that his age and ill-ftting suits, clunky shoes, informal sweaters and plaid shirts helped to encourage.

The facial expressions captured in the published photos also served to emphasize the age gap between Paul and his opponents as well as between Paul and many voters. The campaign trail’s harsh lighting emphasized his wrinkles;  close-up images of him typically made him look haggard, vulnerable and even fragile.

For additional details about the photographic coverage of Ron Paul, see the individual news outlet pages.