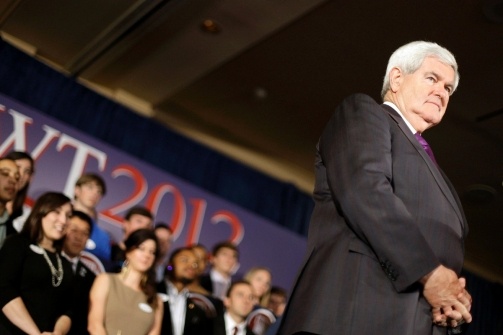 HIGHLIGHTS FROM THE GOP PRIMARIES

AT THE PODIUM — ALONE AND DISAPPROVING:   The 18 news outlets in this study rarely published photographs of Newt Gingrich wading into throngs of supporters or surrounded by media. Instead, Gingrich most often appeared either alone or with his wife, Callista — set apart from the general public, standing stiff and distant.

Photographers commonly pictured all four Republican candidates addressing audiences.  However, while Romney and Santorum often appeared in photographs that pictured them in mid-speech as was the case with Gingrich too, the photographs that showed Gingrich addressing a usually out-of-the-photograph audience captured him from less positive angles than similar photographs of Romney and Santorum. Photographers took low angle shots, where Gingrich appeared to loom ominously over readers, even when his expression or gestures could be read more neutrally.

Such images had two effects:  on one hand, the formality and authority of the moments made Gingrich appear to be a serious candidate, but on the other that very superiority limited the perception of him as someone who cared about or who could engage with average voters.

DWINDLING COVERAGE:   In the early months of the campaign for the Republican nomination, from late November 2011 into January of 2012, Newt Gingrich appeared as a surprising frontrunner.  Attention to his candidacy didn’t last, however, and his dwindling legitimacy was reflected in the limited photographic coverage of him during the February and March primaries.  Researchers pinned on average 25 photos of Gingrich from each of the 18 news outlets in this study, significantly fewer than the average number of those pinned for Mitt Romney (78) and Rick Santorum (57).

For additional details about the photographic coverage of Newt Gingrich, see the individual news outlet pages.