This page provides a summary of research results for the Washington Post’s photographic coverage of the 2012 presidential election and the GOP primaries. 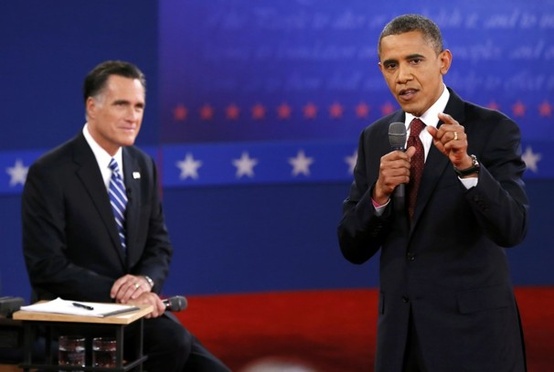 The Washington Post took seriously its role as the news organization of record for the federal government, running substantially more photographic coverage* of the 2012 presidential election than any other news outlet in the PrezPix study. 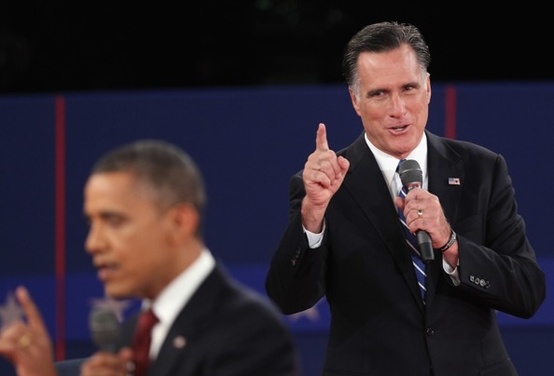 Remarkably, despite the swings in poll numbers in September and October, the percentage of “positive” photos of Obama published* by the Post remained roughly the same across all three weeks.  Not so those of Romney.

These six images of Barack Obama and Mitt Romney are a sampling of photos published by the Washington Post during the three weeks of the PrezPix study.  Clicking a photo links to the Pinterest board of that photo.

These six pie charts show the percentage of positive — neutral — negative photos of Barack Obama and Mitt Romney from the Washington Post coded by researchers during the three weeks of the PrezPix study.

This pie chart shows WashingtonPost.com’s relative photographic attention to each of the four GOP candidates.

In February and March 2012, WashingtonPost.com provided extraordinary photographic coverage of all four GOP candidates on almost a daily basis. As the paper of record in the nation’s capital, WashingtonPost.com closely covered the top candidates as they campaigned across the primary states. Campaign stories appeared daily on the site’s home page, as well as on the dedicated section Campaign 2012, the Election 2012 Blog, the individual pages for each candidate, and multiple other specialized pages, including ones relating to campaign ads, finance and polling.

In total, researchers  “pinned” to Pinterest 447 photos:  216 photos of Mitt Romney, 133 photographs of Rick Santorum, 66 of Newt Gingrich and 32 photos of Ron Paul.

POSITIVE: Judging by the sheer number of photos of the former Massachusetts Governor, the Post had already decided by late February through March that Mitt Romney would be the Republican candidate for president.  With over 200 photos published through the website (although quite a few were used for multiple stories and therefore counted more than once), the Post pictured Romney in a wide range of settings and expressing a wide range of  emotions.

Yet throughout the images, whether Romney appeared friendly or stern, coders noted that Romney appeared confident.   Coders never coded an image as showing Romney looking vulnerable, lonely or depressed.  Even the many photos that showed Romney alone tended to show him in a commanding position — in fact often those images were shot from a literal low angle so Romney appeared larger than life. 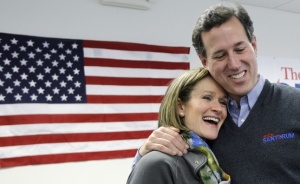 POSITIVE: The Post featured Rick Santorum in over a 100 photos across the February-March primary season, although, as was the case with the images of Romney, many photos appeared on multiple occasions. The Post typically defaulted to close-up shots of Santorum, as it had of Romney, where his expression — and the meaning of the photograph — could be read at a glance. 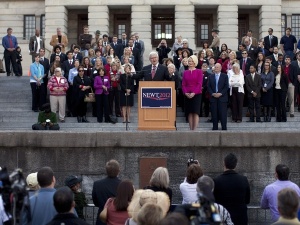 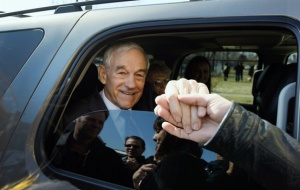 NEUTRAL:  Even more so than Gingrich, Ron Paul was at times lauded and at times dismissed in the pages of the Post.  The Post published perhaps the most positive photos of Paul across this study (e.g. see an energized Paul shaking hands at left top), but among the most negative ones too (note how small Paul looks in the police-line-up-esque photo at left bottom).

The Post‘s niche is politics. Based in Washington, the hub of politics around the country, it is no surprise that its coverage was dogged and extensive.  The Post provided extensive coverage of the 2012 Republican primaries, which included numerous photo galleries, thousands of news articles and blogs, videos, and its own Campaign 2012 site, prominently linked on its home page.  The Post gave each candidate his own page, which included a bio and links to the Post’s most recent articles and pictures of the candidate.

PINTEREST:  The interaction between The Washington Post and Pinterest was unpredictable. Some days the interface would be seamless, with Pinterest picking up every picture, thumbnail, and video screenshot. Others days the Pinterest “pin it” button did not locate some or any of the pictures on the screen. Once pinned, however, most Post pictures could be linked back to successfully, however at times the links back to the Post site appeared broken.

CONTEXT:  The Washington Post is an online and print news organization regarded as one of the leading daily newspapers and news websites in the United States. The paper is especially known for political coverage of its hometown — perhaps the apex of which was the reporting by Bob Woodward and Carl Bernstein of the Watergate scandal that contributed to the resignation of President Richard Nixon.

The Post was first published on December 6, 1877 by Stilson Hutchins.  The paper and website today are divisions of The Washington Post Company, a diversified media and education company.