This page provides a summary of research results for Philly.com’s photographic coverage of the 2012 GOP primaries.

This pie chart shows Philly.com’s relative photographic attention to each of the four GOP candidates.

From the primaries at the end of February through those late in March, Philly.com published a significantly larger number of photos of both Mitt Romney and Rick Santorum then it did of Ron Paul and Newt Gingrich. Researchers understood this disparity to  likely a reflection of the favorable chances both Romney and Santorum were perceived as having for becoming the Republican presidential nominee, and the concomitant lack of optimism about Gingrich’s and Paul’s chances.

Yet, with the exception of the photos of Ron Paul, the pictures selected by Philly.com of the three other candidates were extraordinarily positive in tone. This might have reflected an effort by editors to “objectively” represent the candidates over these four key weeks at the height of the political primary season.

In total, researchers  “pinned” to Pinterest 241 photos:  112  photos of Mitt Romney, 88 photographs of Rick Santorum, 26 of Newt Gingrich and 15 photos of Ron Paul. 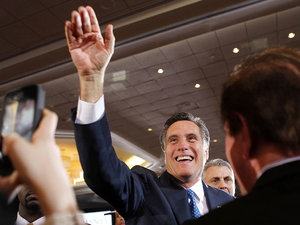 POSITIVE: Philly.com published extremely positive photos of Romney, repeatedly showing him smiling, engaged, assertive.  Philly.com, like many of the other news outlets looked at during the primaries as well as the general election, used one photograph repeatedly for different stories.  The upbeat photo (left), for example, of Romney with hand raised in greeting while supporters surrounded him (one taking his picture with a smart phone) illustrated eight different breaking news stories on Super Tuesday, including two announcing that Santorum had won Oklahoma and Tennessee. 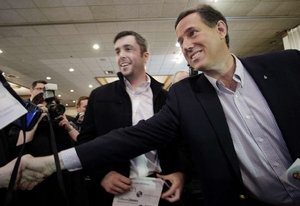 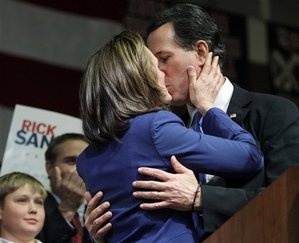 POSITIVE: Philly.com published extremely positive photos of Rick Santorum, repeatedly highlighting him smiling and connecting with supporters. Many photos capitalized on his boyish charm and his evident connection with his wife.  As with Philly.com’s photos of Romney, Santorum is also often depicted with hand outstretched, literally almost out of the camera frame, as if he is reaching out to the viewer of the photo.

POSITIVE:  Few news outlets pictured the warm and fuzzy side of Newt Gingrich, but the majority of photos from Philly.com showed him smiling, engaged and genuine, coders noted. 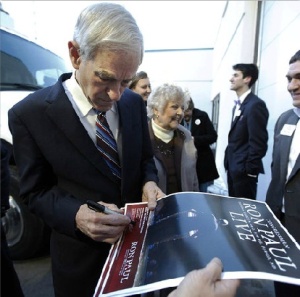 NEGATIVE:  Even in a photo with Ron Paul signing an autograph (left) that appeared on Super Tuesday in Philly.com, somehow the candidate appears lost and alone.  None of the supporters or staff in frame are looking at Paul, and he himself appears downcast.  Such a tone was typical of how Philly.com represented Paul.

During the 2012 presidential primary season Philly.com devoted a section under the “Politics” section titled “More Presidential Political News” where  researchers found most of the photos collected.

PINTEREST: Philly.com synced well with Pinterest;  the main images associated with articles were easily able to be pinned.  The only limitation of the site was that images in slideshows were not able to be grabbed with the “Pin It” button.  As a work around, researchers tried to take screenshots of key images to pin.