This page provides a summary of research results for the LA Times’s photographic coverage of the 2012 presidential election and the GOP primaries. 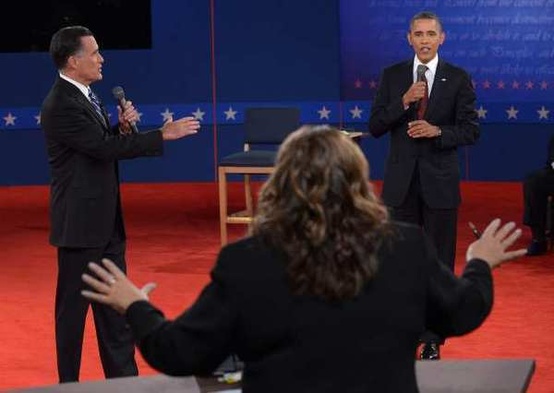 As was the case across the media, photos from the debates dominated the LA Times’ coverage, even beyond the breaking-news events.  Most often the candidates appeared in shots with each other, or in split-screen photos showing mirrored expressions. 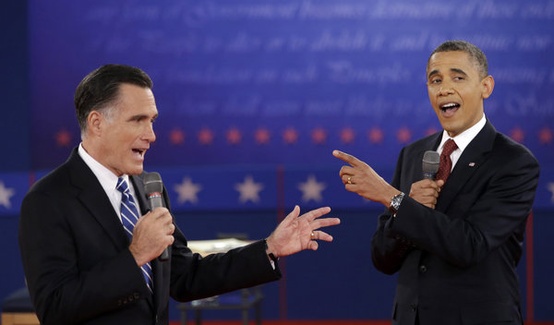 When the candidates weren’t appearing in photographs with each other, Romney — even more than Obama — appeared alone.  Unlike during the primaries Romney rarely appeared in photos engaging with supporters.

These six images of Barack Obama and Mitt Romney are a sampling of photos published by the LA Times during the three weeks of the PrezPix study.  Clicking a photo links to the Pinterest board of that photo.

These six pie charts show the percentage of positive — neutral — negative photos of Barack Obama and Mitt Romney from LA Times coded by researchers during the three weeks of the PrezPix study. 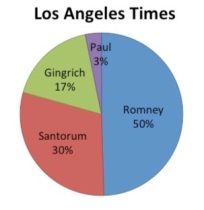 This pie chart shows LATimes.com‘s relative photographic attention to each of the four GOP candidates.

Throughout the GOP primaries of the spring of 2012,  the Los Angeles Times featured a “Politics Now” blog within their U.S. Politics section that hosted most of the outlet’s photographic coverage of the GOP primaries.  Yet, while the LA Times posted several daily photos of Romney and Santorum, waning coverage of Gingrich and Paul left a significant gap in the number of published photographs of the two trailing candidates. This division among the candidates continued, with the LA Times publishing a greater number (and proportion) of photographs of Romney and Santorum mingling with their supporters than of Gingrich and Paul. More than many other news sites, the LA Times selected “unusual” photos of the individual candidates — something other than head shots or “grip-and-grin” photos.  That tendency to look for the different angle, however, may have led, however, to meaningful shifts in the way the LA Times pictured the various candidates.  Coders noted, for example, that the LA Times published more unreservedly positive photos of Romney than of his GOP opponents. In total, researchers  “pinned” to Pinterest 239 photos:  108  photos of Mitt Romney, 86 photographs of Rick Santorum, 38 of Newt Gingrich and 7 photos of Ron Paul. 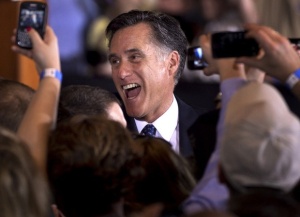 POSITIVE:  Photos of Mitt Romney in the LA Times showed him in an overwhelmingly positive light — more than half of the pinned photos pictured him laughing, smiling or dynamically speaking with an audience visible in the background. 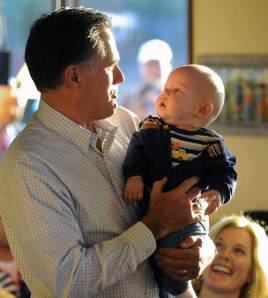 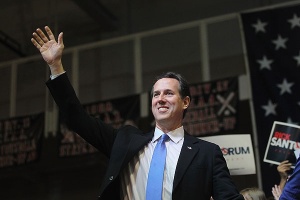 POSITIVE:  The LA Times photos of Rick Santorum, while positive over all, were less so than its images of Mitt Romney.  While Santorum was often pictured smiling, the LA Times pictured him more than Romney on a podium by himself, without a visible audience of supporters. 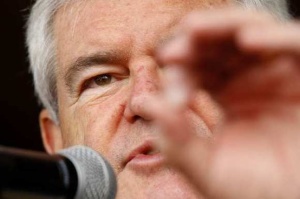 NEUTRAL:  Researchers found and pinned 38 Los Angeles Times photographs of Newt Gingrich over the course of the study — unsurprisingly, the number of photos of Gingrich diminished overtime. 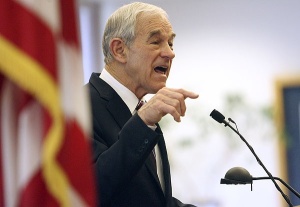 NEGATIVE:  Over the course of the study, researchers found only seven photos of Ron Paul to pin. The lack of coverage suggested that the LA Times did not consider Paul to be a serious contender in the 2012 Presidential election.

For the 2012 election, the LATimes.com provided thorough coverage with in-depth daily coverage on its home page and especially on its Politics Now blog, which posted and aggregated articles, features and photos surrounding the presidential primaries and general election.

PINTEREST: The Los Angeles Times‘s website synced relatively poorly with Pinterest. The LA Times often ran thumbnail-sized photos on its landing pages.  When those thumbnails were pinned to Pinterest, the image didn’t always link back to the originating page.  To try to circumvent that situation, researchers attempted to go to pin a larger photo from the article itself,  but often when a thumbnail was clicked from the landing page, the story that opened either had no photo or actually featured a video.  The LA Times‘ pay wall blocked articles and kept casual users from gathering information about the photo, such as who the photographer was.

CONTEXT: The Los Angeles Times launched as a daily newspaper in Los Angeles, California in 1881. The Tribune Company, the parent company of the Chicago Tribune, bought the award-winning paper in 2000.  LATimes.com has been the online version of the daily paper since 1990.