This page provides a summary of research results for the Denver Post’s photographic coverage of the 2012 presidential election. 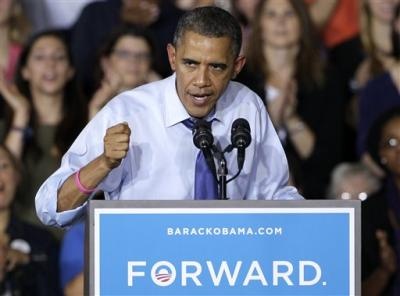 The Denver Post‘s staff photographers took distinctive pictures of the first presidential “hometown” debate on Oct. 3.  Those images dominated the Post’s coverage not just of the debate but of the entire week. 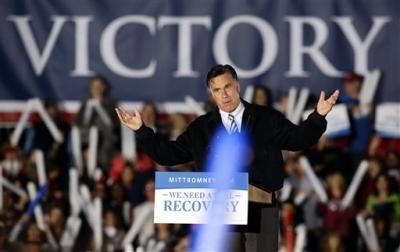 The Post‘s photos of the first debate emphasized each candidate alone on stage, and focused on their expressions and body language, rather (as was the case with the photos from AP) than on their confrontations with each other.

These six images of Barack Obama and Mitt Romney are a sampling of photos published by the Denver Post during the three weeks of the PrezPix study.  Clicking a photo links to the Pinterest board of that photo.

These six pie charts show the percentage of positive — neutral — negative photos of Barack Obama and Mitt Romney from The Denver Post coded by researchers during the three weeks of the PrezPix study.

During the 2012 presidential general election season DenverPost.com, hosted most of their coverage in its “Politics” section. The site also had a dedicated “Election 2012” section, but this hub displayed no images – just links to the articles where the photos were visible. In addition to these sections, a reader could also find pictures in the site’s “Photos” tab which would redirect to the Denver Post‘s “Media Center.” The section featured photo galleries for specific campaign events.

PINTEREST: DenverPost.com synced well with Pinterest;  the main images associated with articles were easily able to be pinned.  However, it was necessary to click through every article to find if pictures were associated with that article. The main pages did not contain many photos for the most part. It was also impossible to pin videos and video previews, which detracted from the ability to gather the entire visual experience for a reader.

CONTEXT: DenverPost.com is the online home of The Denver Post. The paper is owned by MediaNews Group, Inc.  The paper was first published in 1892, and 6.4 million unique users now visit DenverPost.com per month, making it the leading online media presence in Colorado.