This page provides a summary of research results for the Christian Science Monitor’s photographic coverage of the 2012 presidential election and the GOP primaries.

A smile was the most frequent expression on both men’s faces, even in the photos taken in the relatively acrimonious settings of the debates.  The Monitor tended by default to select positive or neutral images of the candidates. 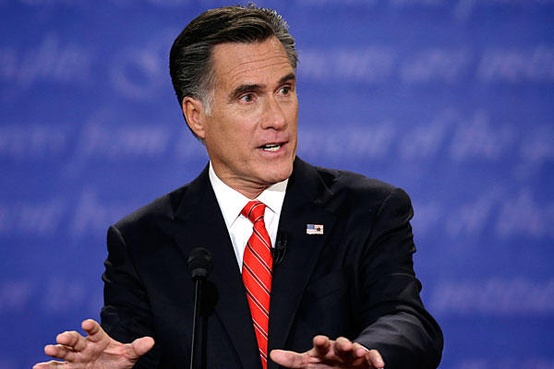 Over one-third of the Monitor’s photos featured both candidates — a consequence of the number of photographs taken during the presidential debates and then repeated over the following days.

These six images of Barack Obama and Mitt Romney are a sampling of photos published by the Christian Science Monitor during the three weeks of the PrezPix study.  Clicking a photo links to the Pinterest board of that photo.

These six pie charts show the percentage of positive — neutral — negative photos of Barack Obama and Mitt Romney from the Christian Science Monitor coded by researchers during the three weeks of the PrezPix study. 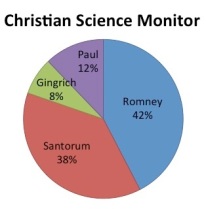 This pie chart shows CSMonitor.com’s relative photographic attention to each of the four GOP candidates.

Throughout the February and March 2012 Republican primary campaign, CSMonitor.com published a similar number of photos of Mitt Romney and Rick Santorum — and in each case, roughly five times as many photographs of those two front runners as of Gingrich or Paul.   The Christian Science Monitor was one of the few outlets in the survey, however, that  published more photos of Paul than it did of Gingrich over the one month study period.

Researchers pinned a total of 65 images of the candidates during the research period:  28  photos of Mitt Romney, 25 photographs of Rick Santorum, 5 of Newt Gingrich and 7 of Ron Paul.

The evenness of the numbers of the two leading and the two trailing candidates, however, partially hides the tone of coverage.  The Monitor’s photographic coverage of Mitt Romney appeared a bit contradictory:  photos of him with supporters appeared very positive, while photos of Romney on the podium depicted him more neutrally.  By contrast the Monitor published more uniformly positive photos of Rick Santorum — he was often shown smiling, both when he was with voters or on stage.  The photos of Ron Paul also appeared relatively positive across the board, while researchers evaluated those images that the Monitor published of Newt Gingrich to be more neutral in tone. 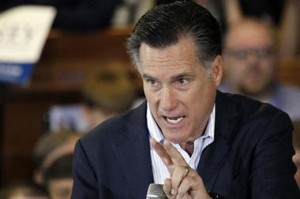 NEUTRAL:  Researchers noted that the photos of Mitt Romney published by CSMonitor.com hit two different tones:  images of Romney engaging with supporters portrayed him quite positively — as friendly and approachable, often smiling.  By contrast, those that pictured Mitt Romney speaking often presented him in a negative manner, as stiff or stern, researchers found.

POSITIVE:  By comparison to the photos that CSMonitor.com published of Mitt Romney, the news outlet published more images of Santorum smiling than images that pictured him with any other facial expression.   About half the images of Santorum show him with supporters and in almost all those occasions the Monitor selected photos of him smiling — both of which factors are often the determining factors for positive coding.

NEUTRAL: Researchers noted that they could pin only five photographs of Newt Gingrich  from CSMonitor.com. In all the photos, Gingrich is addressing an audience, and in four out of the five images, the American flag is dominant.

POSITIVE:  Researchers could only pin seven images of candidate Ron Paul during the month-long period of study, a number consistent with the general trends researchers saw across the news outlets in this study.

PINTEREST: The website interfaced with Pinterest well.  All photos on the site appeared “pinnable,” and in reverse, when photos “pinned” to Pinterest boards were clicked, they led back to the Monitor article associated with the photograph. The photos that were embedded in the articles and blog posts were easy to pin in their full size after clicking on the article.

CONTEXT:  The Christian Science Monitor was started in 1908 by Mary Baker Eddy, the founder of the Church of Christ, Scientist.  In 2008, the Monitor’s editor, John Yemma, announced that the newspaper would discontinue its daily print edition, and publish instead a magazine-style publication once a week.  Today, despite its religious affiliation, the Pulitzer-award-winning news outlet has a reputation of politically balanced coverage.

It is fair to note, however, that the number of photographs of any individual candidate collected for any given site is a rough indication of the commitment of that site to photographically covering that specific candidate