This page provides a summary of research results for Bloombergs’s photographic coverage of the 2012 presidential election and the GOP primaries. 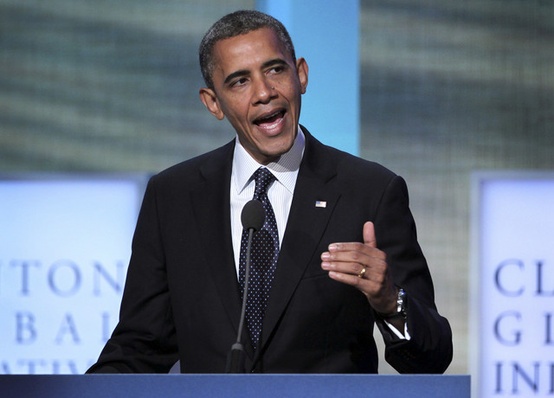 Together with Politico, Bloomberg was the only news outlet that treated both candidates roughly on par across September and October — even though the tone of coverage did shift over the course of the campaign season. 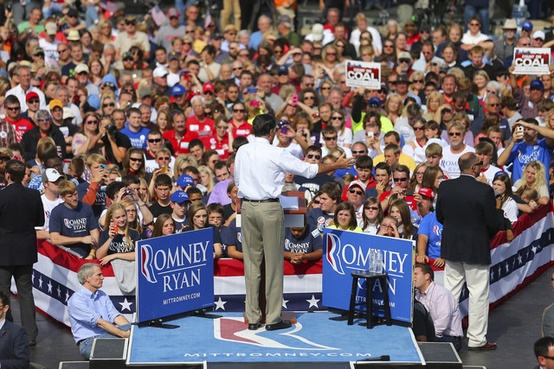 Researchers noted a striking similarity in the tone of the photographs for both men, no matter how differently they were trending in the polls.

These six images of Barack Obama and Mitt Romney are a sampling of photos published on Bloomberg.com during the three weeks of the PrezPix study.  Clicking a photo links to the Pinterest board of that photo.

These six pie charts show the percentage of positive — neutral — negative photos of Barack Obama and Mitt Romney from Bloomberg coded by researchers during the three weeks of the PrezPix study. 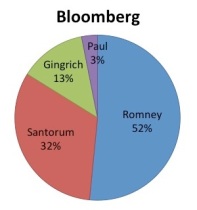 This pie chart shows Bloomberg.com’s relative photographic attention to each of the four GOP candidates.

Throughout its February and March 2012 coverage of the Republican primary campaign, Bloomberg.com  paid significantly more photographic attention to Mitt Romney than the other top GOP candidates. Only the Daily Beast paid greater attention (proportionately) to Romney.  Researchers who daily checked Bloomberg pinned a total of 161 photos of the four men:  83  photos of Mitt Romney, 52 photographs of Rick Santorum and 21 of Newt Gingrich.  Ron Paul received minimal attention with only five images pinned during this time period.

The skew of these numbers does, however,  reflect the polling data across the month-long period.  And it is noteworthy that coders evaluated Bloomberg’s images as generally positive in tone for Romney, Santorum and Gingrich, despite the disparity in the attention to them. 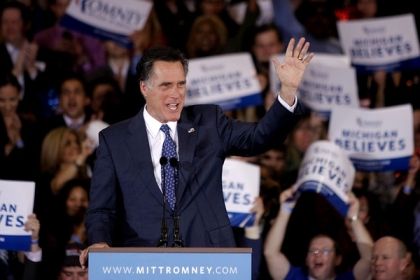 POSITIVE: Bloomberg’s photographs of Mitt Romney showed him in a positive light: coders evaluated over half the photos as portraying Romney as charismatic, confident or friendly. 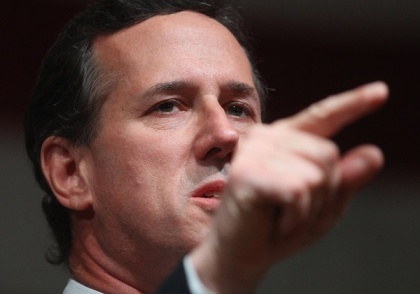 POSITIVE:  While researchers coding Bloomberg‘s photographs of Rick Santorum noted that overall their tone was positive — that Santorum appeared in the photos as a serious and confident candidate — coders did not evaluate Santorum’s photos as positively as those published of Romney, or even of Gingrich (even though Bloomberg published more than twice as many images of Santorum as Gingrich). 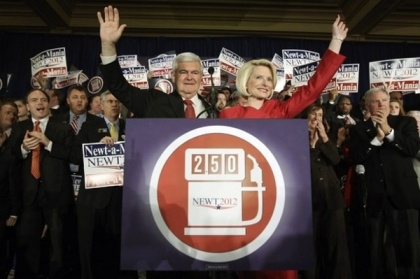 Photo of Ron Paul sitting with security watching him published in a photo gallery on Bloomberg‘s website on March 6, 2012. Ethan Miller/Getty Images

NEGATIVE:  Coders were able to find and pin only five images of Ron Paul from Bloomberg during the collection time period.  Because of this, there was not enough data for coders to draw substantial conclusions, beyond noting that the lack of images would likely reinforce an impression that Paul was not a serious contender for the presidency.  Coders did make few observations about the existing images:

During the 2012 primary and general election season,  Bloomberg used an “Election 2012” page to cover the relevant campaigns.  This section contained articles and photo galleries relating to the election.  Separately, the site also hosted a blog,  “Political Economy,” (which was changed to Political Capital during the general election) where posts would often include images.  The majority of presidential pictures found on this site were pinned from articles found on the “Election 2012” hub , but some were also from “Political Economy/Capital.”

PINTEREST: Bloomberg (Bloomberg.com) integrated easily with Pinterest.  Using the “Pin It” button, article images, slideshow images,  as well as thumbnail screengrabs of videos were all able to be pinned.

CONTEXT:  Bloomberg.com is a website owned by Bloomberg L.P. which self-identifies as “the pre-eminent source of business and financial news and insight online.” In 1982, Michael R. Bloomberg and others founded Bloomberg L.P.  The company has digital, magazine and broadcast divisions that employ 2,300 media professionals in 146 bureaus across 72 countries.