President Obama pauses while speaking at the unveiling of the Chavez National Monument in Keene, Calif.  Photo by Brendan Smialowski, AFP / Getty Images.  10/16/2012

HIGHLIGHTS from the GENERAL ELECTION

Pictured at ease, as dynamic, as visionary… until the first debate —  Most of the 18 news outlets evaluated for the general election PrezPix study pictured Pres. Barack Obama less often but more positively than his opponent Mitt Romney.  In September, early in the fall campaign, Obama appeared visionary, backed by the American flag, staring boldly ahead.  On other occasions he could be seen exhorting the crowds, or wading among groups of students, women, veterans, workers, seniors, African-Americans, all with broad smiles and outstretched hands.  Campaign excitement came through palpably in the photos.  Then came the first debate on October 3.

Images from the 90 minutes of the first debate dominated coverage of the next week (even more than the photos of the second debate dominated that week’s coverage. —  The 18 news publications literally ran the same reflex blue-backgrounded photos of the first debate over and over again.  Whether covering the first debate, or using the fallout from that debate to frame follow-up campaign events and stories, the visuals from the entire first week of October appeared to be photo stills from a political Groundhog Day.

Photos of Obama went (somewhat) negative after the first debate — but regained some (positive) ground after the second “comeback” debate  —  The photos published from the first debate featured an appreciably different set of expressions on Obama’s face — often in split-screen images with Romney — than the photos had in the weeks before.  Obama appeared less certain, more frustrated, less ebullient.  Photos showed him smiling less, looking down more, grimacing, alone.  And that shift in tone was repeated and repeated and repeated in a few similar images.  Slowly, by the week of the second debate, the tone began to shift back, but while Obama started to smile again, far fewer pictures appeared showing the spontaneity and informality of his earlier interactions with supporters.

A dynamic president (for a while) 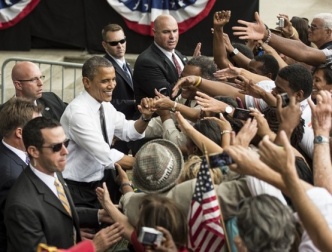 Photographs early in the fall campaign often captured a dynamic connection between Pres. Obama and the crowd who came to see him. Photo by Nikki Kahn, The Washington Post. 9/17/2012

Four years on, still an inspiring leader:  In the photos published in mid-September 2012, the camera loved Barack Obama’s lean frame, narrow face and infectious grin.  Two weeks before the first debate, news outlets selected photos where Obama’s body language mimicked what the polls were saying:  he was confident and the crowds loved him. Although the 18 publications in this study published more photographs of Mitt Romney, those online news outlets published more positive photos of Obama.

A split-screen image of Obama and Romney taken from images in the first presidential debate on Oct. 3, 2012. This image appeared the day after the debate on Fox News, and then repeatedly afterwards, including after the second debate on Oct. 13.

The dampening effect of the first debate came through in the photo selection made almost uniformly across news outlets:  In photos before the first debate the president appeared dynamic and energetic — but that dissipated after his lackluster performance.

By the week of the second debate, the photos of Obama and Romney became more balanced in tone

Yet another split-screen shot after the second debate. Published in USA Today on Oct. 20, 2012

Campaign coverage became predictable, even in the midst of the up-down-up of the polls and the images that tracked public opinion:  By the middle of October, the grinding nature of the campaign found parallel in the photos of it.  In most news outlets, the two men’s “positive,” “neutral” and “negative” numbers were in rough parity — more so than ever before — but at a cost of the kinds of dynamic shots familiar to partisans of both men from earlier on in the campaign:  the kinds of photos seen in the primaries of Romney, and the kinds of photos seen before the debates of Obama. 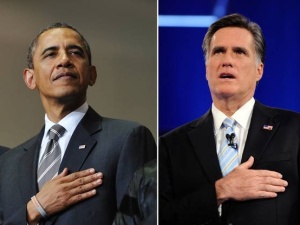 Yet another paralleled shot — it doesn’t get more “American” than pledging allegiance to the flag. Published in USA Today, on Oct. 19, 2012

For additional details about the photographic coverage of Barack Obama, see the individual news outlet pages.